Erythroferrone (human) ELISA Kit - The only Specific & Sensitive Assay on the Market!

Erythroferrone (also called Myonectin, CTRP15, Fam132B or ERFE) is a hormone produced by erythroblasts in the bone marrow in response to erythropoietin controlling iron storage release or is a myokine abundantly expressed in skeletal muscle tissue, upregulated by voluntary exercise. Erythroferrone/Myonectin is a potential clinical biomarker for assessing erythropoiesis in patients with blood disorders, to study iron homeostasis for cardiovascular/heart protection, and potentially for metabolic disorders.

NEW Erythroferrone (human) ELISA Kit - The BEST on the Market

NOTE: The products AG-45B-0014 and AG-46B-0012 are based on the same Matched Antibody Pair!  For more recommendations related to detected values in context with dilutions of the samples, please see below.

i) Erythroferrone (called Myonectin for this role) is a myokine abundantly expressed in skeletal muscle tissue, upregulated by voluntary exercise that is suppressed by fasting and induced by refeeding; it participates in the regulation of systemic lipid metabolism by promoting the clearance of nonesterified fatty acids (NEFA) from circulation. As a myokine, Erythroferrone/Myonectin acts as an endurance exercise-driven myokine which protects the heart from ischemic injury by reducing cardiomyocyte apoptosis and macrophage inflammatory response.

ii) Erythroferrone is produced by erythroblasts after bleeding or Erythropoietin (EPO) treatment and acts on hepatocytes to suppress expression of the hormone hepcidin. Erythroferrone inhibition of hepcidin allows ferroportin, the sole known iron exporter, to mediate the release of iron stored in gut, spleen and liver in the blood plasma. Erythroferrone functions as erythroid modulator of iron metabolism and hemoglobin synthesis.

Erythroferrone is therefore a biomarker for different types of anemia, for cardiological diseases and potentially also for metabolic diseases. 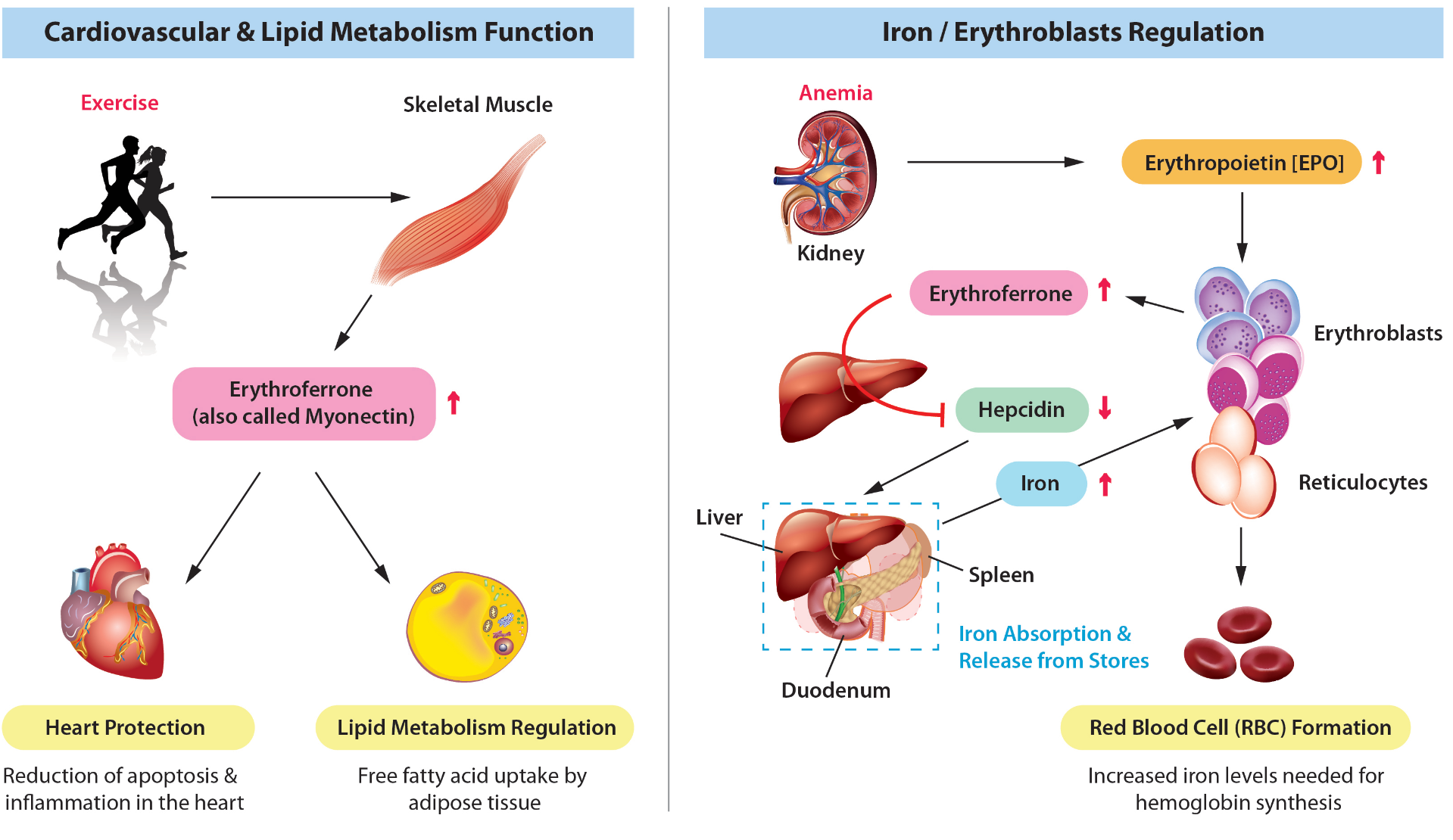 NOTE: For a possible scientific explanation of these observations and further information related to this recommendation please download our Explanation & Hypothesis.