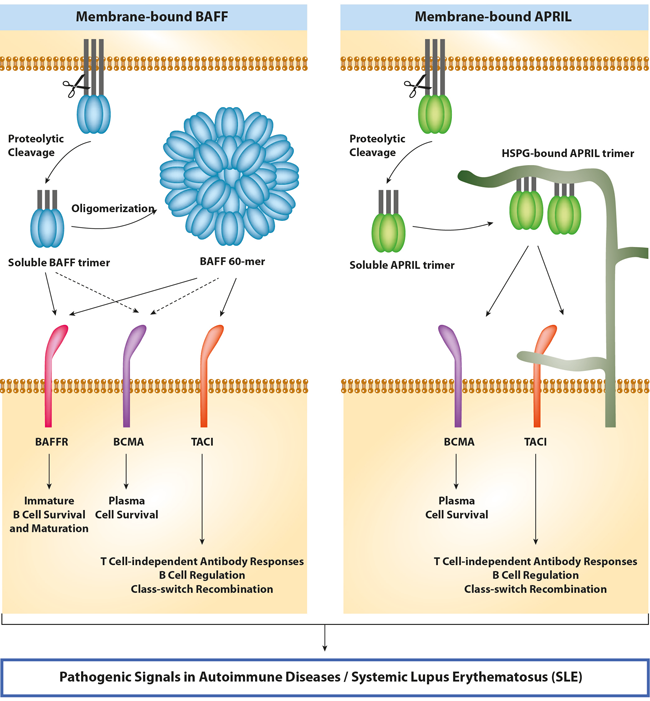 The B cell-stimulating molecules, BAFF (B cell activating factor, also known as BLyS; TALL-1; CD257 or TNFSF13B) and APRIL (a proliferation-inducing ligand, also known as CD256 or TNFSF13), are critical factors in the maintenance of the B cell pool and humoral immunity (1, 2).

APRIL is a secreted protein that binds to transmembrane activator and CAML interactor (TACI), B cell maturation antigen (BCMA) and heparan sulfate proteoglycans (HSPG). APRIL can interact with carbohydrate side chains of proteoglycans that may trigger cross-linking (3).

BAFF is a transmembrane protein which is proteolytically processed by furin to be released as a soluble cytokine (2). Soluble BAFF exists either as trimers (BAFF 3-mer), or as an ordered assembly of 20 trimers (BAFF 60-mer) (4). BAFF 3-mer and BAFF 60-mer both signal through BAFF-R, only TACI (and BCMA) respond to BAFF 60-mer and not to BAFF 3-mer (4). Similar observations are true with APRIL, which needs to be cross-linked in order to activate TACI (4).

APRIL maintains B cell homeostasis by acting at a later stage, modulating the function and survival of antigen-experienced B cells. BAFF is a key survival factor for peripheral B cells and together with IL-6 plasma cell differentiation (2). APRIL (as well as BAFF) stimulates class-switch recombination (CSR), hence contributes to shaping humoral effector mechanisms. With regards to humoral memory, APRIL is involved in the establishment and survival of the long-lived plasma cell (LLPC) pool in the bone marrow (BM) (5). Besides its major role in B cell biology, BAFF co-stimulates activated T cells.

APRIL is expressed by a number of myeloid-derived cell types including BM granulocytes, megakaryocytes, eosinophils, osteoclasts, and by dendritic cells following exposure to IFN-α, IFN-γ or CD40L. APRIL expression is induced during hematopoiesis in the bone marrow. APRIL expression is not limited to cells of myeloid origin but can be found in epithelial cells of the gut, tonsil, breast and skin. Finally, APRIL is expressed in tumor cell lines and human cancer cells of colon, thyroid and lymphoid origin (1).

A recent study reports that APRIL confers atheroprotection by binding to heparan sulfate chains of heparan-sulfate proteoglycan 2 (HSPG2), which limits the retention of low-density lipoproteins, accumulation of macrophages and formation of necrotic cores. In this study, they use AdipoGen's specific anti-APRIL (mouse) antibody (Apry-1-1) that promotes the binding of APRIL to HSPGs to reduce experimental atherosclerosis. They also observe that serum levels of a specific form of human APRIL that binds to HSPGs (termed non-canonical APRIL), are associated with long-term cardiovascular mortality in patients with atherosclerosis (13).

NEW APRIL (human) ELISA Kit - The BEST on the Market

The APRIL (human) ELISA Kit (Prod. No. AG-45B-0012) is a sandwich ELISA for specific quantitative determination of human APRIL in serum, plasma and cell culture supernatants. This ELISA Kit shows both high specificity and high sensitivity, which is a clear advantage compared to other APRIL (human) ELISA Kits from key competitors, such as eBioscience or Biolegend.

The BAFF, Soluble (human) ELISA Kit (Prod. No. AG-45B-0001) is a sandwich ELISA for specific quantitative determination of human BAFF in serum, plasma and cell culture supernatants. This ELISA Kit does not cross-react with mouse BAFF and has been chosen by several CROs for its high specificity and high sensitivity.

AdipoGen Life Sciences' anti-BAFF (mouse), mAb (blocking) (Sandy-2) (Prod. No. AG-20B-0063) is a monoclonal antibody that recognizes mouse BAFF and works specifically in IP and Functional Application. The antibody inhibits mouse BAFF binding to BAFF-R and TACI. It is highly potent in blocking mouse BAFF in vivo and induces B cell depletion and generates a phenotype similar to that observed in BAFF-/- mice. The antibody is available with or without preservatives.

AdipoGen Life Sciences' anti-APRIL (mouse), mAb (rec.) (blocking) (Apry-1-1) (Prod. No. AG-27B-0001) is a recombinant monoclonal antibody that recognizes mouse APRIL and works specifically in IP and Functional Application. The antibody inhibits mouse APRIL binding to BCMA and TACI. It is highly potent in blocking mouse APRIL in vitro and in vivo. In addition it promotes the binding of APRIL to HSPGs and confers atheroprotection. The antibody is available with or without preservatives.

AdipoGen Life Sciences, with its deep roots in TNF Superfamily research, provides a unique panel of highly active and multimeric APRIL and BAFF recombinant proteins. The validated high quality research tools are used and published by the experts in BAFF and APRIL research on a daily basis.

Other Reagents for BAFF and APRIL Research