Recombinant Monoclonal Antibodies [RecMAbs™] - Produced with No Use of Animals 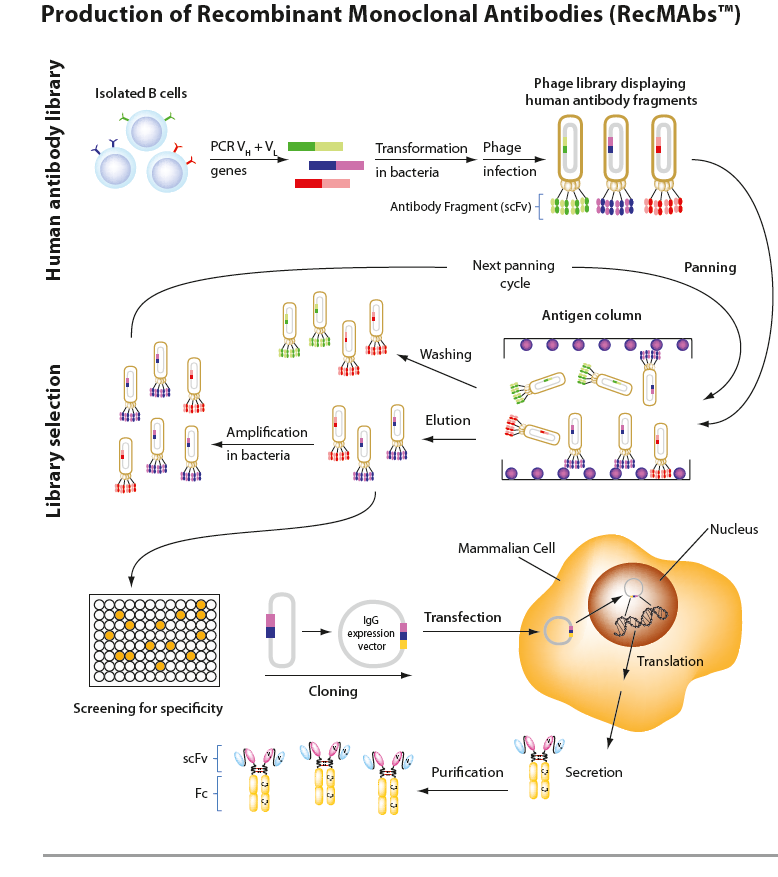 AdipoGen Life Sciences (AdipoGen) is a research company developing proteins, biochemicals, antibodies and ELISA Kits. To promote the advancement of non-animal alternative approaches (3Rs), AdipoGen implemented the antibody phage display technology in-house to develop monoclonal antibodies without the use of animals. Using this technology, AdipoGen was a forerunner in releasing the first recombinant monoclonal antibody for research on the market in 2010: anti-APRIL (mouse), mAb (rec.) (blocking) (Apry-1-1). Since then, our portfolio of fully validated recombinant antibodies made with the phage display technology continues to grow, with a focus on functional antibodies that can block or activate their respective target.

Antibody phage display is an in vitro technology to generate recombinant monoclonal antibodies (RecMAbs™) without the us of animals. It is an alternative to the hybridoma technology that circumvents the limitations of the immune system. Antibodies developed by “antibody phage display technology” use human naïve antibody gene libraries. These libraries consist of billions of scFv (single chain fragment variable) composed of VH (variable domain of the human immunoglobulin heavy chain) and VL (variable domain of the human immunoglobulin light chain) connected by a polypeptide linker. The antibody fragments are fused to the coat protein pIII and displayed on the surface of filamentous bacteriophages (M13). The scFvs are selected in vitro by affinity selection on the antigen in a process termed panning, where the antigen of interest is coated on a vial (see Figure). Panning methods are based on four major steps: i) preparation of phage-displaying libraries; ii) adsorbing the specific binding phage on an antigen-coated vial, iii) removal of non-specific or low affinity phages, and iv) recovering of target binders that will be reamplified after bacteria infection for the next round of selection. Multiple rounds of panning are performed to enrich the antigen-specific scFv-phages. Monoclonal antibodies are subsequently identified by screening after the last round of selection. The selected monoclonal scFv is cloned into an appropriate vector containing a Fc portion of interest and then produced in mammalian cells to generate an IgG like scFv-Fc fusion protein. 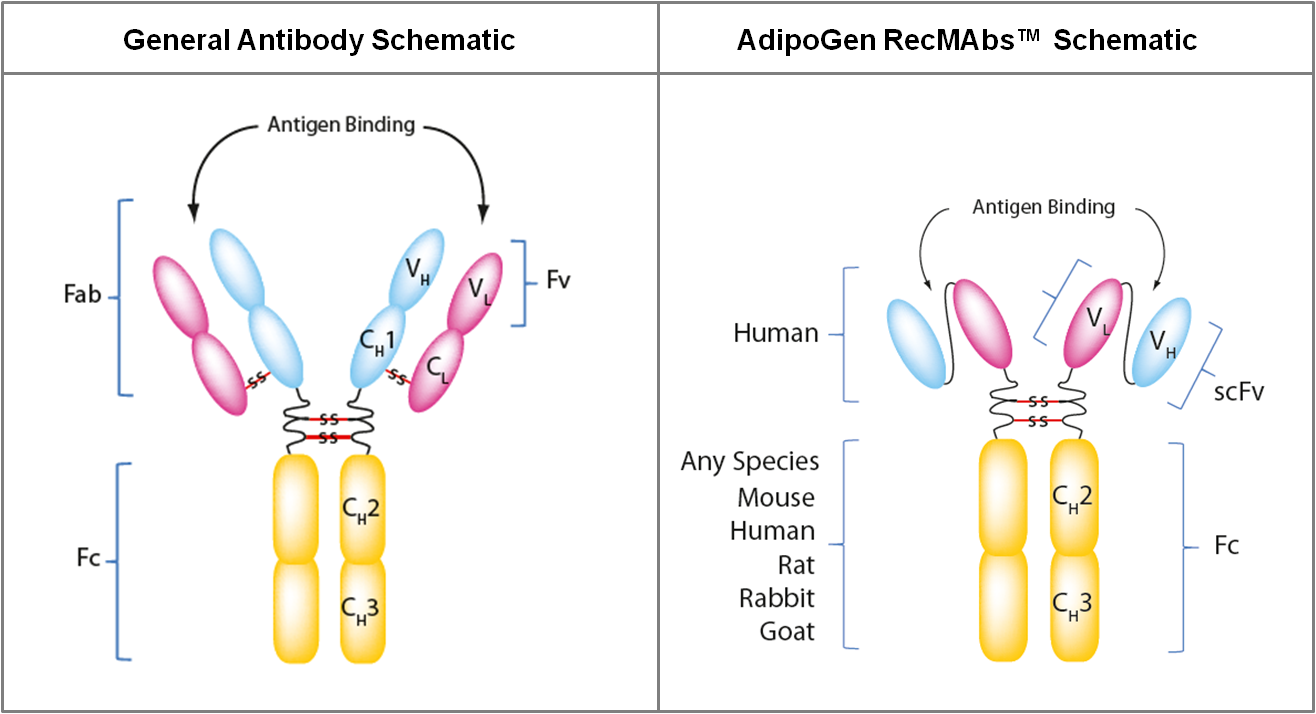 There are many advantages to use recombinant antibodies instead of "classical" antibodies: i) no requirement of sacrificing animals in an animal facility; ii) economical production and permanent storage of DNA clones; iii) sequence-defined antibodies allowing reproducibility in experiments; iv) use of a single chain antibody fragment to reformat a RecMAb™ into a full-length IgG construct for research or therapeutic purposes. 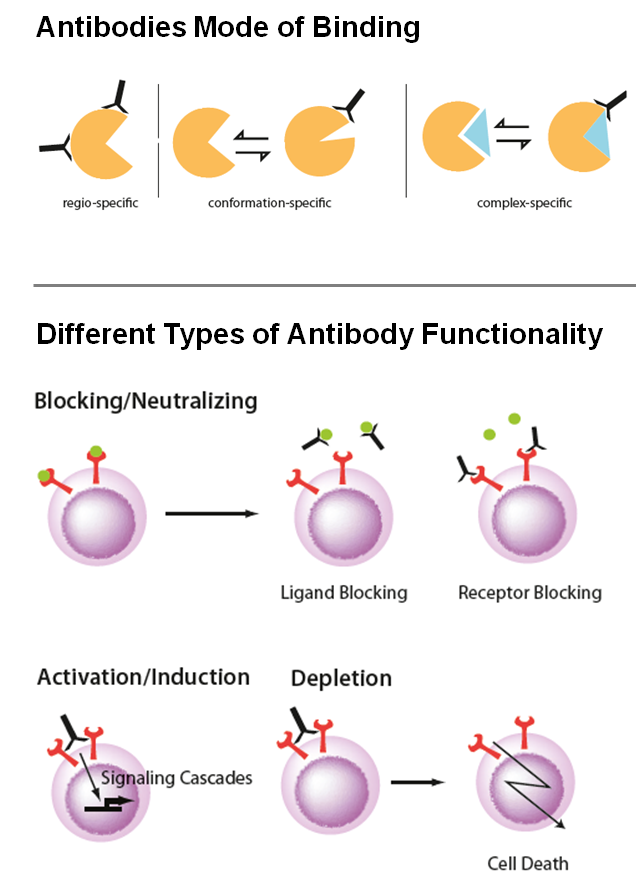 An important attribute of the RecMAbs™ phage display approach is the ability to design selection strategies to generate antibodies with customized functions (FuncAbs™), which furthermore can be classified based on activity or mode of binding. By example, it is possible to generate RecMAbs™ that: (i) preferentially recognize a specific conformational state and thus, have the potential to induce a specified conformational change; (ii) target specific regions of the surface of the target protein (‘‘regio-specific’’) or (iii) specifically recognize multi-protein complexes.

VALIDATED Recombinant Monoclonal Antibodies [RecMAbs™] with No Use of Animals

AdipoGen Life Sciences offers the proprietary Recombinant Antibody Technology as a Service for the development of Recombinant Monoclonal Antibodies for Research Purposes or Therapeutic Applications.