An inflammasome represents a high molecular weight complex that activates inflammatory caspases and activates cytokines of the IL-1 family. Several inflammasomes have been described and were so far defined by the NLR protein that they contain - the NLRP1 (NALP1) inflammasome, the NLRP3 (NALP3) inflammasome and the IPAF (NLRC4) inflammasome. Interestingly, the AIM2 (absent in melanoma 2) inflammasome, which has been described recently, does not contain any member of the NLR family. Inflammasomes can be activated through multiple signals including live bacteria, microbial toxins, xeno-compounds, PAMPs and DAMPs. It is suggested that the LRR domains of NLRP3 mediate autorepression, probably by SGT1 and HSP90 chaperones that maintain NLRP3 in an inactive, but signal-competent state. Upon sensing of their respective ligands, NLRP1 or NLRP3 oligomerize via the NACHT domain, what leads to PYD clustering and to the recruitment of the adapter protein ASC (apoptosis-associated speck-like protein containing a CARD) due to homotypic PYD-PYD interactions. In the case of AIM2, oligomerization is likely mediated by clustering upon multiple binding sites within dsDNA and not by a central oligomerization domain like NACHT. 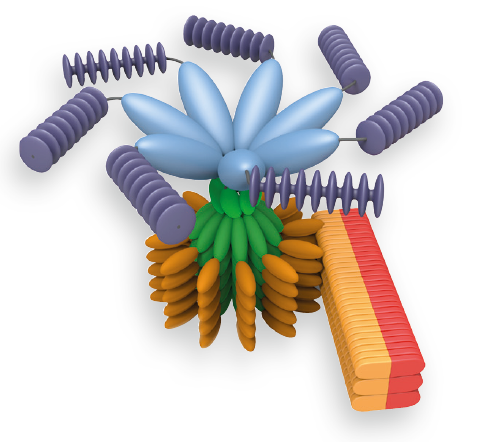 However, AIM2 oligomerization also leads to the recruitment of ASC via homotypic PYD-PYD interactions. ASC contains an N-terminal PYD domain and a C-terminal CARD domain that allows the recruitment of inflammatory caspases through homotypic CARD-CARD interactions. Thus inflammatory caspases are brought into close proximity what permits autoactivation and formation of the active caspase. In case of procaspase-1, a p10/p20 tetramer is formed after autocleavage. In addition to caspase-1, NLRP1 can also recruit caspase-5 to the complex but the role of caspase-5 is still under debate. Contrary to NLRP1, NLRP3 and AIM2, IPAF does not recruit an adapter molecule but directly interacts with procaspase-1 via its CARD domain (see Figure below). However, depending on the IPAF stimulus, maximal caspase-1 activation downstream of IPAF can require ASC or NAIP. The assembly of the different inflammasomes elicits a common downstream cascade, namely the activation of inflammatory caspases. These include caspase-1, -4 and -5 in human and caspase-1, -11 and -12 in mouse. However, caspase-1 appears to be the most dominant inflammatory caspase associated with inflammasomes. The inflammatory caspases all have a CARD domain followed by a domain containing the catalytic residue cysteine and are called inflammatory caspases because their main substrates are cytokines (such as pro-IL-1β, pro-IL-18 and eventually pro-IL-33) which are cleaved to their active and secreted form. In addition, inflammasome activation can lead to host cell death in certain cell types, known as pyroptosis. Pyroptosis is thought to be important in restricting the intracellular replication of invasive pathogens. 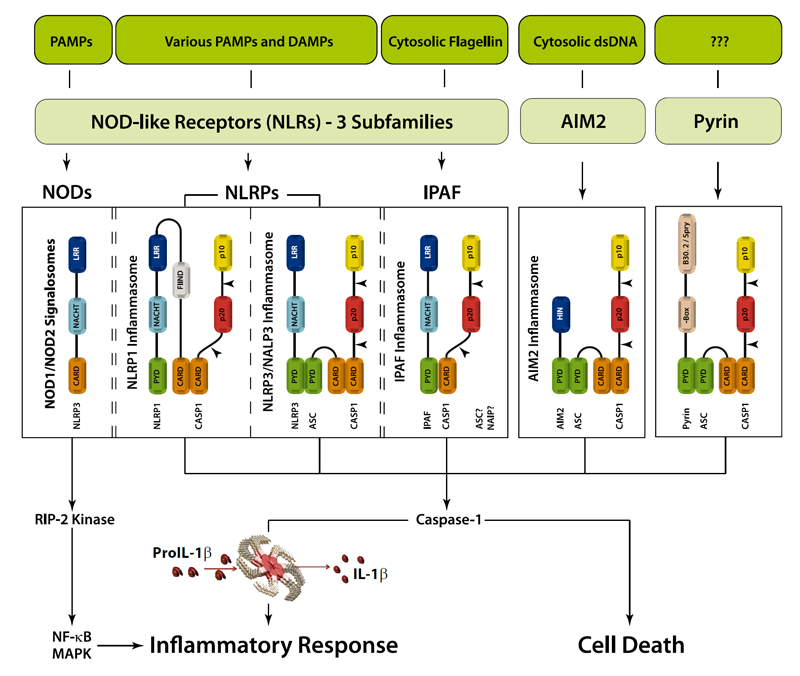 Figure: Danger signals or bacterial compounds as activators of inflammasomes and NODs.

As IL-1β and other cytokines are key players in the inflammatory response, it is tempting to speculate that IL-1β, inflammatory caspases and inflammasomes play an important role in several diseases (see Figure below). Indeed, some human hereditary or acquired diseases have been linked to elevated IL-1β, some of which can be treated by antagonists against IL-1β or its receptor. A number of diseases, known as cryopyrin-associated periodic syndroms (CAPS), have been directly linked to NLRP3 mutations. Furthermore, gout, an autoinflammatory disease characterized by severe joint inflammation, is associated with the deposition of MSU crystals in joints, among other characteristics. As MSU is a potent NLRP3 inflammasome agonist, it is believed inflammasome-regulated IL-1β exerts a pathogenic role in gout. Furthermore, IL-1β secretion by the NLRP3 inflammasome is triggered by high extracellular glucose in b-cells. Elevated IL-1β is a risk factor for the development of Type 2 Diabetes Mellitus (T2DM) and contributes to insulin resistance.Thus by functioning as a sensor for metabolic stress, like in the form of monosodium urate (MSU) or hyperglycemia, the NLRP3 inflammasome likely contributes to the pathogenesis of gout or T2DM, respectively.In addition, several inflammasome regulators have a significant relevance in diseases. In patients with FMF (familial Mediterranean fever), pyrin was shown to be mutated. Elevated IL-1β levels in the autoinflammatory disease PAPA (pyogenic arthritis, pyoderma gangrenosum, and acne) are associated with mutations in PSTPIP1, a pyrin interacting protein. Together, this indicates the importance of pyrin and inflammasome regulators in autoinflammatory diseases and may allow novel entry points for disease treatment. 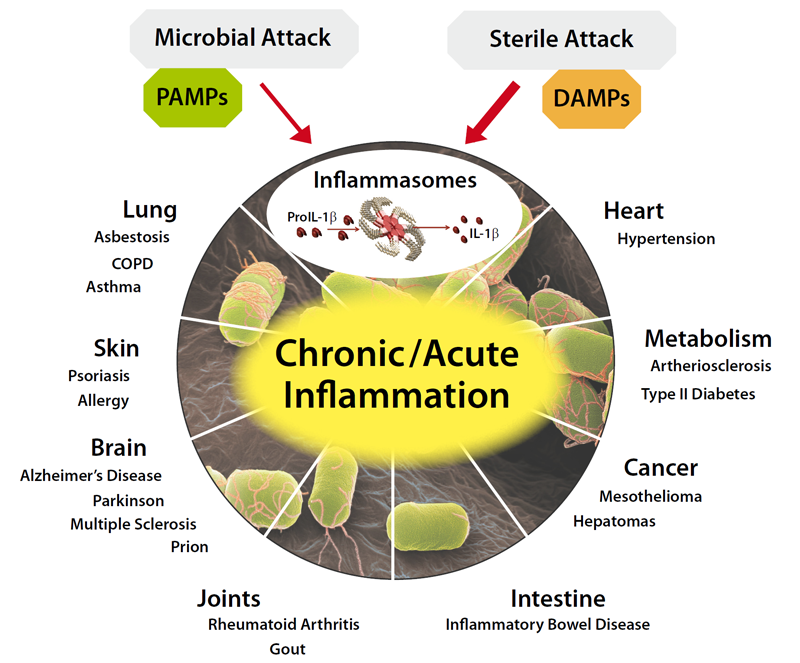 Detailed View on the Inflammasomes & Their Signaling

NLRP1 Inflammasome
The anti-apoptotic proteins Bcl-2 and Bcl-XL were recently shown to bind and inhibit NLRP1. Bcl-2 and Bcl-XL inhibit ATP binding to NLRP1, what is required for oligomerization and furthermore, Bcl-XL was shown to suppress NLRP1 oligomerization. Thus inflammatory caspases are not brought into close proximity what negatively interferes with caspase-1 autoactivation and subsequent processing of pro-inflammatory cytokines. In addition to those potential NLRP1 activity regulators, K+ efflux appears to be essential for NLRP1 activation.

NLRP3/NALP3 Inflammasome
Even though the exact mechanism of NLRP3/NALP3 inflammasome activation is still under debate, three models are favored among researchers:
1) The NLRP3 inflammasome agonist, extracellular ATP, binds to its receptor P2X7 what triggers K+ efflux and pannexin-1 membrane pore formation. The latter may enable the entry of extracellular factors, which can be direct NLRP3 activators. It is also suggested that NLRP3 may senses the K+ efflux or membrane integrity.
2) Phagocytosed crystalline or particulate NLRP3 ligands, such as MSU, alum, silica and asbestos, can cause lysosomal destabilization and rupture due to mechanical insult what leads to the release of lysosomal content into the cytosol. As this pathway is sensitive to the cathepsin B inhibitor CA-074-Me, it was suggested that cathepsin B, a lysosomal protease, is involved in the activation of a direct NLRP3 ligand. However, no altered IL-1β secretion and caspase-1 cleavage in response to NLRP3 ligands, like MSU or alum, was observed in cathepsin B deficient macrophages. It is yet not known how NLRP3 senses cytoplasmic lysosomal content.
3) The third model involves the production of reactive oxygen species (ROS). All NLRP3 agonists tested lead to the production of ROS and furthermore, ROS scavengers suppress NLRP3 activation. The cellular source of ROS is currently unknown and although ROS seems to be necessary for NLRP3 inflammasome activation, it is not sufficient. In bcells, TXNIP (thioredoxin-interacting protein; VDUP1), which is a ROS-sensitive NLRP3 ligand, was shown to be involved in triggering NLRP3 activation.

IPAF Inflammasome
The IPAF inflammasome becomes activated by gram-negative bacteria possessing a functional T3SS or T4SS, like S. typhimurium, S. flexneri, L. pneumophila, and P. aeruginosa. Initially, cytosolic flagellin was shown to trigger the IPAF inflammasome activity. However, as nonflagellated bacteria like S. flexneri also induce IPAF inflammasome activation, it is very likely that there exist other IPAF agonists. As NLRP3, IPAF was shown to bind SGT1 and HSP90. The inhibition of HSP90 by geldanamycin blocks the IPAF activity, indicating that HSP90 is somehow crucial for IPAF signaling.Unlike NLRP1 and NLRP3, IPAF activation is not inhibited by high extracellular K+ concentration, indicating that IPAF is not a sensor for ionic fluxes. However, no direct ligand receptor interaction was observed to date.

AIM2 Inflammasome
The HIN-200 family member, AIM2, acts as a sensor for cytosolic bacterial, viral and host dsDNA and triggers an inflammatory response through the formation of the AIM2 inflammasome. It is suggested that AIM2 binds directly to dsDNA via its C-terminal HIN-200 domain. As AIM2 recognizes also host dsDNA it might be involved in autoimmune diseases. The discovery of the AIM2 inflammasome is not only remarkable because AIM2 is the first non-NLR family member forming an inflammasome, but also because AIM2 is the first inflammasome receptor shown to directly interact with its ligand. 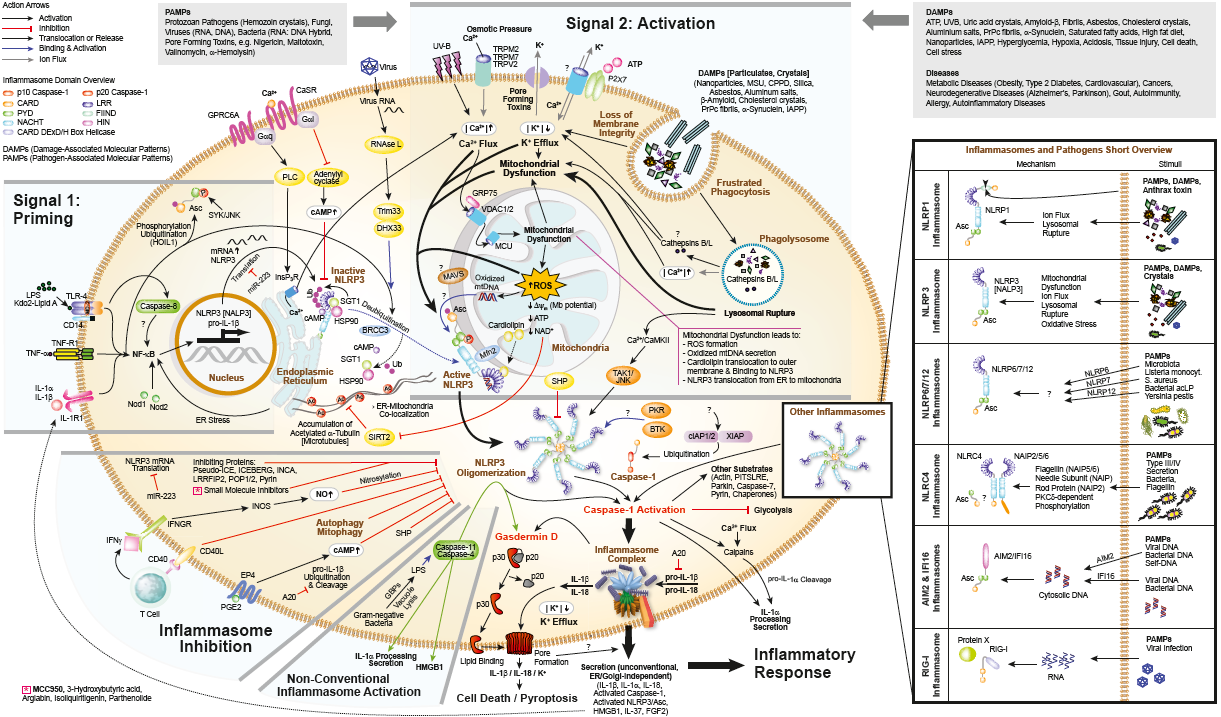 Inflammasomes are multi-protein complexes implicated in physiological and pathological inflammation. Immunoblotting for caspase-1 is the gold-standard method of detecting inflammasome activation, but also presents certain technical difficulties, particularly with the choice of protein precipitation, protein separation and transfer protocols. Priming and Activation steps are crucial for successful immunoblotting as well. Listed below are Spinger Protocols from the Series of Methods and Protocols using Adipogen's Standard Antibodies for Inflammasomes detection.

The Key Inflammasome Activators and Inhibitors - Including New Gasdermin Inhibitor

The most prominent function of the NLRP3 inflammasome is the processing and activation of pro-interleukin-1β (pro-IL-1β). Yet most cells do not express pro-IL-1β and thus prior expression of pro-IL-1β is required. This can be achieved by stimulating receptors such as TLRs (e.g. through LPS), Nods, TNF-Rs (e.g. through TNF-α) or IL-1R1 (through IL-1α and IL-1β) that activate NF-κB and initiate pro-IL-1β transcription. This process is called priming. Priming also induces NF-κB-dependent transcription of NLRP3.

Do not bother anymore to solubilize your LPS, choose and use AdipoGen Life Sciences' homogenous ready-to-use LPS solutions.

See our Panel of TNF-α Proteins for Inflammasome Priming Activation